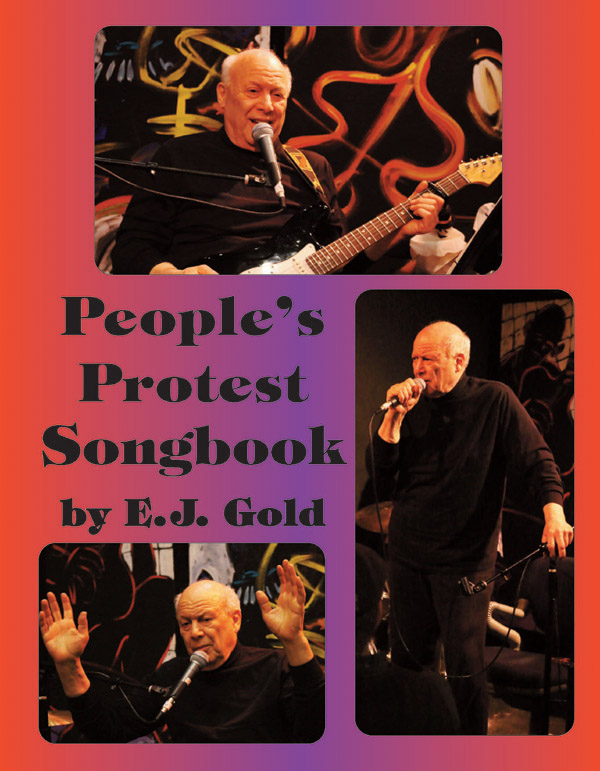 Get the book AND double CD set of EJ singing these 44 songs for special discount price.

Songwriter E.J. Gold sings his People.s Protest Songs from his songbook published under the same title. Lyrics revealing an insightful perspective on Donald Trump in his first month as U.S. President are sung to his guitar accompaniment.

This expose of the humorous and outrageous behavior of Donald Trump, portrayed for the news media and the world wide stage, as described in song, is in strong juxtaposition to the mood of the broadening of social culture as expressed in music from the era of the 1960s and 70s.

E.J. Gold, a student in the 40s - 50s at Downtown Community School in NYC, was a music student of the blacklisted Pete Seeger. He was in the The Greenwich Village scene with music mentors like Dave von Ronk and beat poets like Alan Ginsberg and New York School artists like Jackson Pollock, all on the cutting edge of the counterculture movements that spread throughout the country in the 60s giving rise to artists such as Bob Dylan, Jimi Hendrix and Bruce Springstein.

This collection of Gold's "folk" songs "from the folk" shed light on the turmoil of Trump's presidency and can be appreciated as "straight-shooting" social commentary.