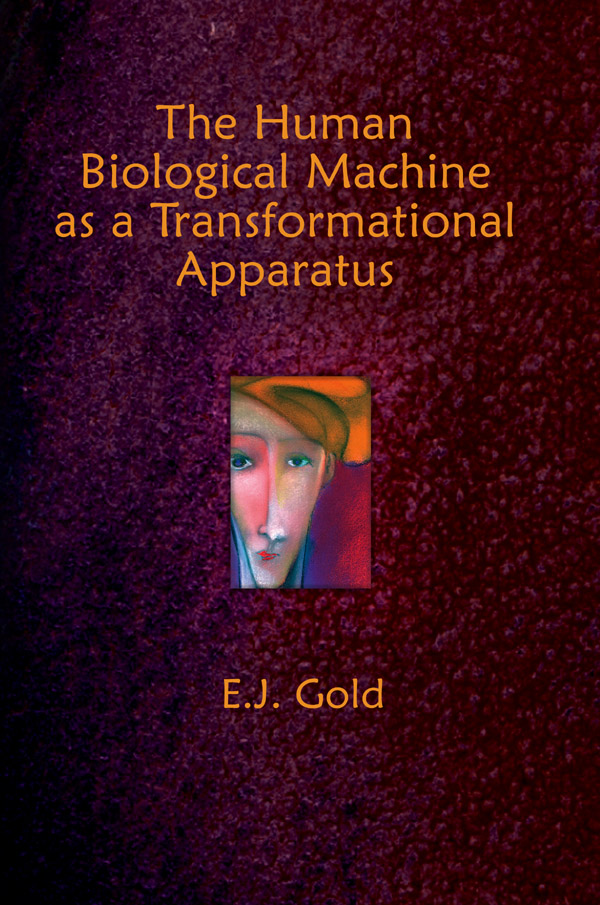 The Human Biological Machine as a Transformational Apparatus

Click here for information about the Collector's Edition of The Human Biological Machine as a Transformational Apparatus.

Human Biological Machine as a Transformational Apparatus by E.J. Gold is now back in print in a glorious, expanded new edition.

This 2nd edition features new artwork by the author/artist E.J. Gold. A set of beautiful charcoals.

Increasingly influential study that presents vital information for anyone on a spiritual path in a practical way. The author emphasizes our transformational potential and how to transcend our ordinary biological and psychological limitations.

I read this book in the wake of my paralyzing stroke. It was enormously helpful as I started battling my uncooperative biological machine.

"Just read the mesmerizing intro to the Human Biological Machine as a Transformational Apparatus and will have to order the book."

From a strictly biological and psychological point of view, we are destined to a painfully brief existence as human beings. Can anything really be done, in an evolutionary sense, that would unlock our full transformational potential and raise us above the futility to which we are presently condemned?

The Human Biological Machine as a Transformational Apparatus, the introduction to a large body of writings of E.J. Gold, a recognized leader in the field of transformational psychology, is an answer to this question. In the spring of 1983, E.J. Gold traveled to New York and began an astonishing series of talks to public and private gatherings. In these talks, he went far beyond a restatement of themes and ideas he has presented for over 20 years. He swept away the superstructure of his theory and began afresh to formulate the basis for his practical course of transformational work. The results are collected in this startlingly original volume, The Human Biological Machine as a Transformational Apparatus.

The clarity and brilliance with which the author treats the human condition in this book is reminiscent of Plato's dialectic. Like the opening sections of the Republic, The Human Biological Machine as a Transformational Apparatus begins by establishing both the need for deep personal inquiry and the subject and method of that inquiry.

These spring from one and the same source. If we have studied our situation as Mr.. Gold has, we know that the body -- including the mind -- seems to have a will of its own which manifests itself in utterly incomprehensible desires and tastes. We are helplessly bound to its immediate gratifications, forced to live with the consequences, both small and at the same time incalculably large, of its domination, always falling short of our higher ideals.

Existing passively and silently within the human biological body is a deeper self with the potential for continuation. From this point, the book takes us into the field of the mystics and guides of all traditions: the continuation of the deeper self is dependent upon achieving its transformation through special use of the body-machine during a human lifetime.

Only this specific transformation obtained through precise efforts can provide us with real freedom from the compelling attraction of organic life. Establishing this point logically or intellectually is a task suited to contemporary writers in phenomenology and psychology. Mr. Gold's true interest lies elsewhere, in the "how" rather than the "why." Using the human biological machine as a weapon against itself by activating its higher transformational functions is an exact science, and what is called for is a manual, a toolkit for accomplishing the task. It is by no means an impossible task, nor is the strategy particularly complex. The basis of the method is disarmingly simple.

On the other hand, it is a formidable path to pursue, precisely because of its effectiveness . It suggests commando raids on the hypnotic conditioning and constraint of ordinary life, which the body will of course resist with its own stubborn will and cunning. What the novice needs more than philosophical justifications is "field expedients" -- battle- tested alternatives for survival behind enemy lines.

As a manual, the present book introduces a clear, concise and understandable method for obtaining real and lasting results under any lifestyle conditions we may find ourselves in at the moment. It is a modern presentation of ideas that have existed outside mainstream knowledge for thousands of years, in vehicles such as the oral transmission of shamanism and the Hermetic treatises of the medieval alchemists.

A better literary comparison than the Republic is the practical meditation manual, whether it be from Buddhist, Hindu, Islamic or Judaeo-Christian esoteric tradition. The Human Biological Machine as a Transformational Apparatus fulfills the function, for a contemporary citizen of a post- industrial nation, of a monastic manual like The Clouds of Unknowing or the Philokalia, which P.D. Ouspensky cites.

Readers who appreciate, among contemporary sources, the concreteness of Tibetan Rinpoche Chogyam Trungpa's Cutting Through Spiritual Materialism, initiate Eugen Herrigel's Zen and the Art of Archery, and artist/Kabbalist Samuel Avital's The Mime Workbook, will value the pragmatic, nitty-gritty approach of Mr. Gold's book.

This book in particular establishes Mr. Gold as one of a handful of inner explorers who conduct their research with the ultimate integrity, using themselves as subjects. Authors in this category include G. I. Gurdjieff, Simone Weil, Henri Michaux, Anais Nin and more recently Dr. John Lilly, inventor of the "sensory attenuation tank" and founder of the Human/Dolphin Foundation.

Zalman Schachter-Shalomi, rebbe of B'nai Or Religious Fellowship and Professor of Jewish Mysticism at Temple University, Philadelphia, the author of another fine practical manual, The First Step, has described Mr. Gold well in his comment on this new book:

"E.J. Gold is not just an armchair guru. Each of his teachings on the path is the result of his empirical work with himself and his associates. From the Balinese monkey chant to intentional out of body experiences he has done it, described it, and taught it. This prolific upaya master deserves our attention. He has specialized in scandalizing the ego and getting people to awaken to their paths as long as I have known him -- over twenty years."

Like few contemporaries, Mr. Gold has not only conducted this inner research painstakingly over many years, but also taken the trouble to map the territory, annotate the maps and write the travelogue to make a veritable "hitch- hiker's guide" through the perils and pathways of inner transformation.

The original series of human biological machine talks were given over the course of a year. The talks culminated with a formulation that is entirely new and original, the idea of "the chronic defense mechanism against the waking state of the machine." Everyone who heard material on the chronic was thunderstruck, even if accustomed to Mr. Gold's brilliance and improvisational genius in giving expression to the ideas of his particular lineage. This was a new idea, a brand new vantage point for working with obstacles that the body-machine continually presents to anyone wishing to be transformed and to evolve.

Several talks expanded and refined this idea until it became a full-blown technique for use in everyday life by anyone... artist, engineer, waitress, doctor, housewife ... It is the universally applicable practice, something that will work in any situation.

In the language of this book, Mr. Gold's interest is exclusively in working towards the evolution of the essential self, never in the modification of the "human biological machine" for its greater comfort or security. "Beyond Personal Enhancement" is one of the chapter titles that could serve as a sub-title for this exceptional book which, if used as intended -- as a beginner's manual -- packs the punch of a living teaching bursting forth with the power of millenia of accumulated force and knowledge behind it.