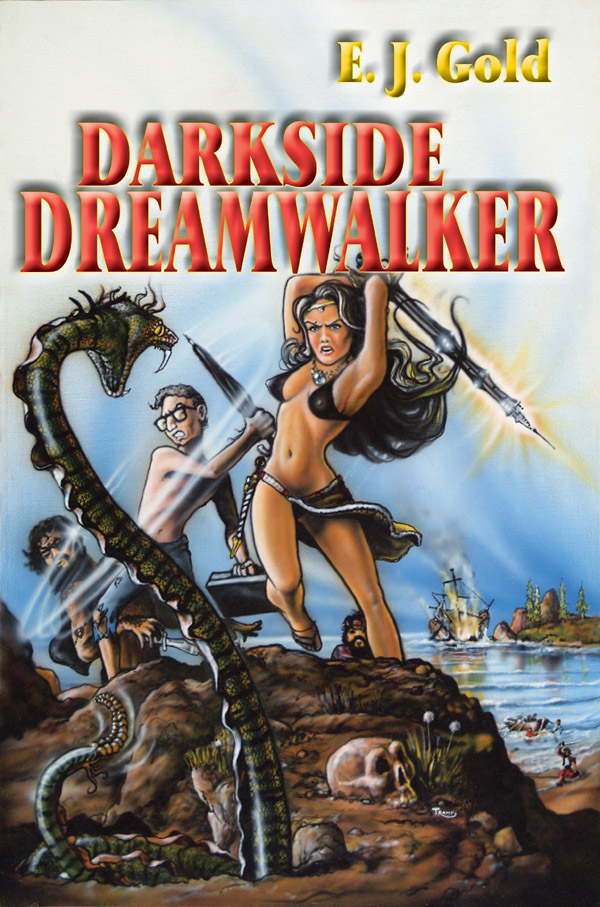 Follow Lieutenant Jinjer Rojjers on her breathtaking ride through the shapeshifting realms of BardoTown, and learn all about Rebirth Stations, deadly bellydances and the surprises of life in the shadow of The Darkside StarDome.

E.J. Gold wears an extraordinary number of hats including author, editor, sculptor, screenwriter, painter, musician, video game designer and legendary online competition gamer. Son of H.L. Gold, the world famous founding editor of Galaxy Science Fiction Magazine, to whom this book is dedicated, Gold's formative years were spent in an artistically rich milieu made up of not only the greatest science fiction writers of the 20th century, but also dancers, actors, musicians, magicians, and New York City's intellectual elite.

With an astounding thirty plus books to his credit as a writer . including fiction, non-fiction, short stories, movie scripts and science fiction . Gold is well-known as the author of best-selling The American Book of the Dead, in print for almost 40 years. Gold, currently at the helm as editor of Galaxy Magazine, now presents us with the utterly hilarious and mysterious hi-jinks of Darkside Dreamwalker's Lieutenant Jinjer Rojjers, as she shapeshifts her way through BardoTown . the City of the Dead.

I love it! Darkside Dreamwalker is one of my favorite books by far. I bought it last weekend during the Sculpture Workshop and I just couldn't put it down. The story is very entertaining, the characters are short and sweet, and very real.

Gangs so savage, so feared, there's no visual descriptions needed. One gets it! A discotek so dangerous and violent, I wasn't even able to be there! I don't know if I even dare. I've read that part time and time again, and I just can't get myself to be in there. It all happens so fast, I can't help but conclude that it is for my own good!

A mad scientist that needs to be stopped, and only the army can do it. No wait, it's a serial killer that has been terrorizing the neighborhood, and it is up to the mayor to stop him with his army. No, wait, there are no victims, but body parts are appearing in the street, and the scientist is not mad but a good guy, and the mayor needs to stop him at all costs. How can a man drown in the Ganges River without ever leaving New York? How can you stop a terribly powerful genie, who is at the edge of exploding, needs legal representation, is killing the people you are sworn to protect, when all he has to do is will you dead to kill you?

Jinjer Rojjers is my favorite heroine. She is not a man? Is she a woman? And her tampon rules! She is sexy without willing it, she is fast, dangerous, and she must solve the most impossible, intriguing dilemmas or it's her ass!

There's something about E.J. which I admire very much -- I have since I first started to read his books. It is not so much the tools he gives us for the development of our True Selves, to help us trigger the waking state, etc. It is the way he manipulates language and words. It was very clear to me from early on that he is not a slave to language like most of us are. He has had to invent his own words to communicate realities to us, and he has done so with this very fun science fiction story too. There's something I admire in this ability. I have found myself playing with it in my own writings, which do not go farther than journal entries and very small text for advertisement or announcement or an experience shared, etc. Whenever I am able to ride the wave, I am shot right up, down, and into a psychedelic experience of sorts, only very real, magical, multidimensional.

Wow! I've read Arabian Nights, A Stranger In A Strange Land, The Hitch Hikers Guide To The Galaxy, The Book of the New Sun series (Shadow of the Torturer, etc.), A Wizard of Earthsea (etc.), Don Quijote De La Mancha, Cien Años De Soledad, Vurt, There Are Doors, The Man In The High Tower, Harlot's Ghost, Last Call, and many more. There's something different about Darkside Dreamwalker. It is a magical item.

It didn't take me long to figure it out. If you read this book carefully, you can see that it is multidimensional. It is not just that the adventures in it are about macrodimensional travels and worlds, it is that the book itself has a characteristic, a device that if triggered, it will reach and rip right through the macrodimensional spectrum, and you may just notice how it isn't just your presently perceived incarnation that has been touched by this apparatus, by this ... damn, I hate it when I loose my words! Damn, because the ones that come in its place are just not it.

I mean it though, it is a device with magical properties, and it is ... an apparatus! Yeah, an apparatus! Boy I do so love it when the word comes back! And thank God for thesauri. I'm not kidding, that's how I see it.

The trigger did not occur until the end of the book for me. It was so very bardoesque that I had to actually travel, you know, voyage, back to my room and to my body just so I could read it one more time, but I was somewhat unsuccessful. It was also a time delayed recognition type of experience. It is not just in the words as they are written at the end, or at least I don't think it is. It might be the text as a whole, maybe. I don't know what it is, but it took me. I recognized, easily, perhaps from experience, the multileveled, extradimensional ability of this book.

I thought at some point of "The Never Ending Story," the movie, but it is not like that. E.J. has taken it beyond a mental thing. Truly shamanic magic, is what it is. E.J. has taken his magic words and concocted this weird, cool, exciting, fun artifact that allows for one to not only voyage through some of the bardo spaces (or at least unlock some of the memories stored deep within) but also to have a multilevel existence recognition. It is really amazing. Other incarnations, other realities, other worlds, all me reading this book and coming to see each other at the end of it. Rustler Cunningham's experience in the flesh! Live it, don't just read it.

I told E.J. I loved his book and he autographed my copy as he pointed me to my next piece of work. Now I'm going to read Horace L. Gold's How To Write Great Science Fiction.

E.J. gave me a task to write for a month. Just write every day, for a month, without worrying about any theme, content, expectations, nothing. He instructed for me to just let the stream of consciousness flow through me -- something like that. So I did, and something happened. I'm not going into detail with this here, but I achieved communication with my Angel. I'm serious. I'm not just crazy, I'm also writing about it!

All bullshit aside, Darkside Dreamwalker is a very fun book to read, and it is deeper than I can see. Much can be learned from having a good laugh. I will now read it to my kids as bedtime stories.