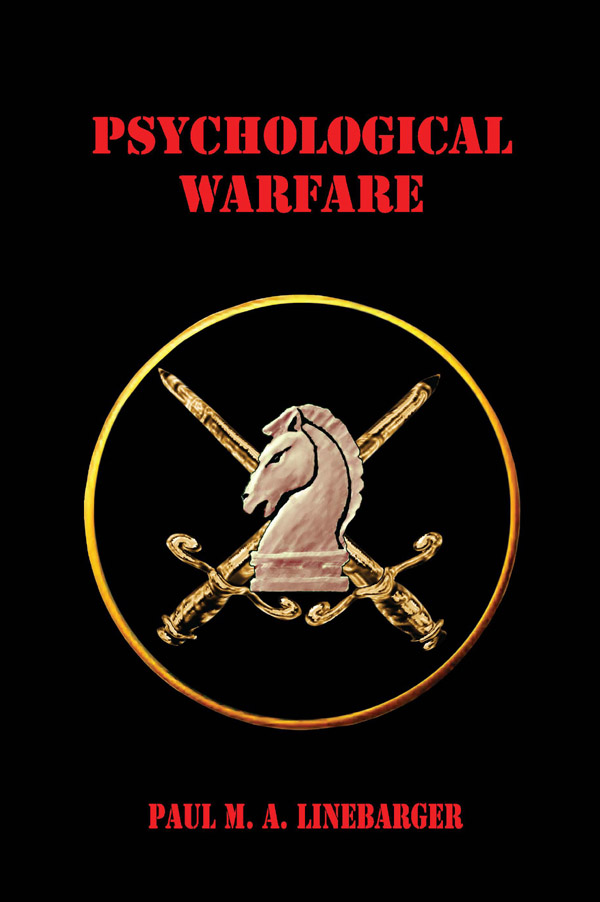 Psychological Warfare, written by Dr. Linebarger who was one of the world's experts on understanding the relationship of culture to propaganda, covers in detail the history, function and definition of psychological warfare. The book has 79 illustrations of leaflets and pamphlets with information regarding the type of propaganda it is was, how it was used and its effect.

Psychological Warfare was in use for many years as the textbook in the US Army course on Psychological Operations. It is as useful today toward understanding the political 'spin' machines as it was in planning some of the most successful psychological warfare campaigns of the last forty years.

The author, Paul M.A. Linebarger was involved in the creation of the Office of War Information and the Operation Planning and Intelligence Board. He also helped organize the Army's first psychological warfare section.

Many books on this topic approach the subject from as a study from afar -- typically offering opinions pro or con on the use of psychological warfare. This book is very different in the respect that it is a down to earth "how to" manual written specifically to be used by military personal during active campaigns. Thus giving a behind the scenes look into the heart of psychological warfare -- similar to watching a stage magician from the theater wings learning the inside secrets.

This book is an inside look revealing all of the inner secrets of what psychological warfare is and how to do it.

"Psychological warfare is waged before, during, and after war; it is not waged against the opposing psychological warfare operators; it is not controlled by the laws, usages, and customs of war; and it cannot be defined in terms of terrain, order of battle, or named engagements. It is a continuous process. Success or failure is often known only months or years after the execution of the operation. Yet success, though incalculable, can be overwhelming; and failure, though undetectable, can be mortal.

"Psychological warfare does not fit readily into familiar concepts of war. Military science owes much of its precision and definiteness to its dealing with a well defined subject, the application of organized lawful violence. The officer or soldier can usually undertake his task of applying mass violence without having to determine upon the enemy. The opening of war, recognition of neutrals, the listing of enemies, proclamation of peace-such problems are considered political, and outside the responsibility of the soldier. Even in the application of force short of war, the soldier proceeds only when the character of the military operation is prescribed by higher (that is, political) authorities, and after the enemies are defined by lawful and authoritative command. In one field only, psychological warfare, is there endless uncertainty as to the very nature of the operation.

Paul M.A. Linebarger (also known as Cordwainer Smith) was born in Milwaukee, Wisconsin, July 11, 1913. His father was Paul M. W. Linebarger, a lawyer and political activist with close ties to the leaders of the Chinese revolution of 1911. When he later pursued his father's interest in China, Linebarger became a close confidant of Chiang Kai-shek. As a result of living in France and Germany during his youth Linebarger was familiar with six languages by adulthood.

At the age of 23, he received a Ph.D. in Political Science from Johns Hopkins University. From 1937 to 1946, Linebarger held a faculty appointment at Duke University, where he began producing highly regarded works on Far Eastern affairs. While retaining his professorship at Duke after the beginning of World War II, he began serving as a second lieutenant of the United States Army, where he was involved in the creation of the Office of War Information and the Operation Planning and Intelligence Board. He also helped organize the Army's first psychological warfare section. In 1943, he was sent to China to coordinate military intelligence operations. By the end of the war, he had risen to the rank of major.

In 1947, Linebarger moved to the Johns Hopkins University's School of Advanced International Studies in Washington, DC, where he served as Professor of Asiatic Studies. He used his experiences in the war to write the book Psychological Warfare (1948), which is regarded by many in the field as a classic text. He eventually rose to the rank of colonel in the reserves. While he was known to call himself a "visitor to small wars", he refrained from becoming involved in Vietnam, but is known to have done undocumented work for the Central Intelligence Agency. He traveled extensively and became a member of the Foreign Policy Association, and was called upon to advise then.U.S. President John F. Kennedy.