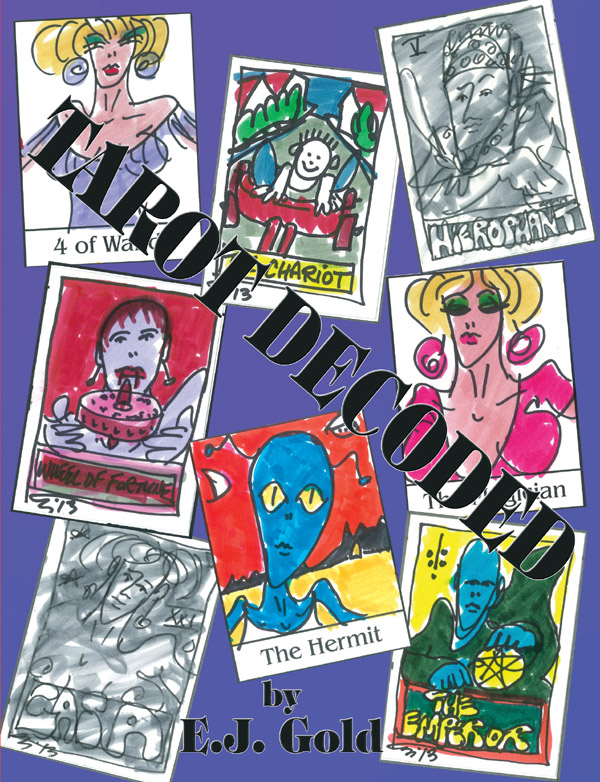 You can learn to use the tarot as a tool of guidance, as a tool of initiation, self-revelation and self-study, because it is a tool for self-study. You can learn a lot about yourself, not by studying it, not fotune telling with it, but by using it as a revelatory tool, a tool that will help trigger off revelations for you, not that the tarot itself will anything to you. But it's a great triggering tool, and if it's used really well.if you have both the art and the science.it will serve you well.

During a February 2013 Tarot workshop at I.D.H.H.B., numerous tarot decks were displayed that E.J. Gold had painted and had had produced as decks. Participants at the workshop were given the opportunity to create their own tarot decks, and in this process, gain a deeper understanding of the tarot. Before E.J. began this talk, the Unspecified Pet tarot deck was being shown card by card.

There's a similarity between the cards, a continuity. There's a motif for the deck itself. There's a difference between the Major Arcana and the Minor Arcana. Each of the suits has its own theme. And each of the numbers or, for example, all the Queens in the different suits, are related in some way.

In the tarot decks that E.J. creates, he tries to keep the cards as eyeball-friendly as possible because the card is meant to serve as a memory aid to help you remember exactly what that card represents. The card is there to remind you that a type of situation is present at that location in the reading and active at that point in the reading. The cards are your "reminding factors" - when you look at the card in a particular position, get a sense that it's just one piece in the "big picture" puzzle.

The tarot images act as a toggle on switch - a radio device that's tuning into something that, when all the pieces of the puzzle are in place, enables you to go beyond the puzzle and read the direct transmission rather than a beta brain regurgitation of the story.

Some folks may think of a tarot reading as a mental activity. But in doing a reading, you never give a recitation. Recitation is the bane of education. It's parroting. There's always the tendency to mechanize, to roboticize any real tool. Tarot reading involves the Theta waves -- the psychic-intuitive functioning of the brain.

Each card stimulates a different centrum. The Wands stimulate the lower or motor instinctive. The Cups trigger the middle brain, which is the emotional centrum. The Swords are the primary trigger to the intellectual or analytical brain. The Pentacles are a portal to the higher centrums.

You're triggering off a knee-jerk reflex in a particular centrum by using the tarot card. The vision of that card triggers it - the card is a visual stimulus. It will trigger off an emotional response if it's a Cups card. The emotional centrum will trigger responsively, it will reflex to that card.

If you want to do readings, the way to find out about your deck of choice is to examine each card one by one. It will take some time. When you examine the cards in this way, really look at each card.

You can memorize what the card means, but you can also "grok it". You can get an emotional grasp of what that card means, what it feels like. Then when it comes up in a reading, you can draw upon your own experience of that card. It helps you develop your very own style of tarot reading.

The tarot is divided up into Wands, Cups, Swords and Pentacles, which could also be called clubs, hearts, diamonds and spades, like in the standard deck of 52 playing cards. In the tarot, there are four more cards in the suits - the Page is added to the Knight, Queen and King.

Think of early radio with coarse tuning and fine tuning. There are two things you need to do to tune in a station - the same as you do with a Brane-Power Beacon(1) and Matrix. The Beacon is the coarse tuning to put you in touch, get you there. The Matrix is what you're going to refine and adjust, and you can use the Prosperity Path Orbs(2) for that purpose. So that will create your fine-tuning for specifically which stations you receive.

There's more to it than just the coarse and fine-tuning analogy. The Beacon is also acting as a communication device, an extreme modifier. Think of the Matrix as the equivalent of, in the video game, Diablo 2, assigning all your skill points and all your character points. That's where they get assigned. But the power behind it is you, and that power behind it is served by the Beacon -- that's the big coarse tuning part of it. But you can't tune a radio unless you have a radio.

You can learn to use the tarot as a tool of guidance, as a tool of initiation, self-revelation and self-study, because it is a tool for self-study. You can learn a lot about yourself, not by studying the tarot, not by fortune telling with it, but by using it as a revelatory tool, a tool that will help trigger off revelations for you, not that the tarot itself will reveal anything to you. But it's a great triggering tool, and if it's used really well - if you have both the art and the science -- it will serve you well.

At first glance Tarot Decoded seemed like a book describing the meanings of the cards. After going through the material, I realised that something else is also going on. The book seems to demonstrate how to be open to the cards so that they can be allowed to generate impressions, forgoing the need for a list of definitions or external consultation. This enables the reader to get started very quickly. Highly recommended.