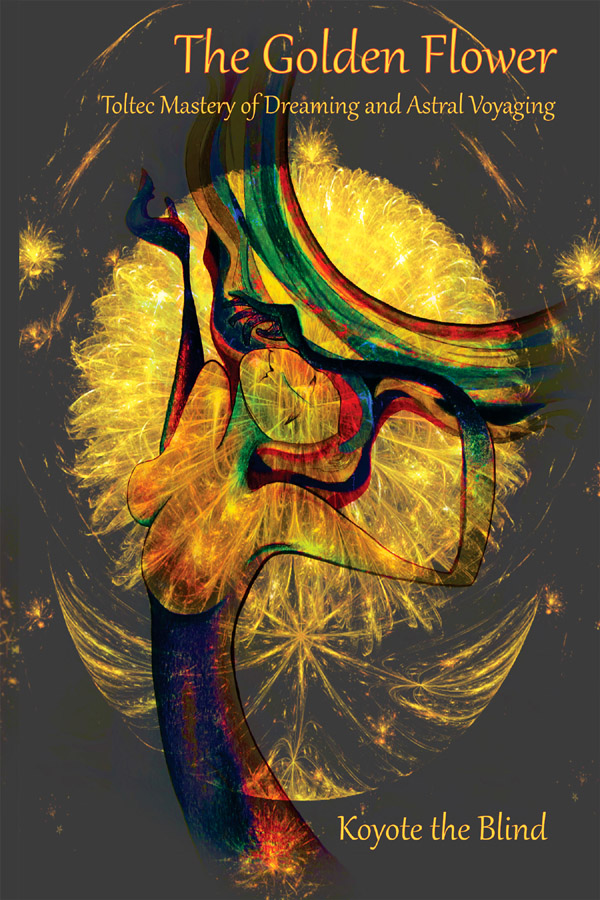 by Koyote the Blind

A unique book on the art of dreaming, astral projection, and voyaging through the higher planes, presented by a Toltec shaman and Western magician. This is the Yoga of Dreaming. It is a distillation of the deepest teachings and art of attainment, delivered in clear and practical, yet poetic, prose. A delight to read, and filled with practical gems throughout. The exercises included in the text will introduce the novice to lucid dreaming practices--or enable the more advanced reader to experiment with a new approach to Dreaming as a spiritual practice.

I am a talker, an hablador. I did not always know this. When I was born, my tongue was fused to the roof of my mouth, and it had to be cut. For a long time I could not roll the r's in my given name. Like Demosthenes, I had to learn to speak clearly by reciting poems with stones in my mouth. The name "Koyote" describes some features of my spirit and how it expresses itself onto the world. The coyote as an archetype is a trickster, a heyoka spirit who uses hidden doors and back alleys of reality. In the popular consciousness of Latin America, he is a sly criminal who smuggles people across the border. In my case, I bring people across borders of consciousness by utilizing the back alleys of perception. I subvert the rules, navigating spaces not many dare. The trickster aspect of coyote applies as well. Sometimes creator, sometimes destroyer, I am always a buffoon... a Fool. The coyote spirit doesn't allow for stability and yet sometimes in moments of chaos he brings something that gives stability.

I am an hablador and my art is the Telling. The Telling is an art of immediacy. The experience is direct and in the moment and is not mediated. It's experiential. There are no scripts, no agenda, no indoctrination! This is the sound that MAKES. Where a traditional storyteller leaves a moral, I, the hablador, deconstruct cultural icons. I don't worry about entertaining. I am not concerned about whether the story delights or offends. I only aim to bring something through from another world.

Each time I perform a Telling, I step into the rivers of primordial chaos and reform the world. My predecessors are the locos (the crazy vagabonds) who once traveled Latin American towns pretending to be crazy drunks. They told absurd tales of magic and mystery to the children. Like them, I draw from the psychic and energetic content of the people present. I weave--using words, mudras (precise gestures), magical passes, and the movements of my shadows--a tapestry of multiple dimensions. The listener is no longer passive; they become part of the terrain. They are now going through what I describe. In the end, it is common to hear them say, "He was talking about me."

I developed the art of the Telling inspired by what I've received from my lineage, which starts among Toltec masters in tenth-century Mexico and whose art was preserved throughout Latin America by drifters who told crazy stories to the children. In a way, it might have started as a way of connecting back to my roots in El Salvador, before I went into exile because my "subversive" acts of teaching war refugees to read and write put my life in danger. The sense of magick, eternal mystery, pervades every layer of my memories from that place before and through the war, and many stories clamor to come out and play in the light of this space created by words and attention.

I have developed the Telling into a form that provokes in the audience uncommon emotions, strange cognitions, and ways of seeing the self that are not easily defined. Having studied philosophy at the graduate level, I approach this art of The Telling in the spirit of the ancient philosophical tradition, disarming the mind and the personality in such a way as to release the being from the domination of habitual thought.

I attempt, in my writings, to apply the art of the Telling to the written page.

The Golden Flower is one of my most treasured possessions. One of a very small collection of books that speak my secret language, that until I started reading these words had eluded me. Turning each page was an act of discovery followed then by the most profound remembrance. Each word was spun not only by a master who knew the secrets of dreams from firsthand experience, but a poet who graced each word with the transformative magic that gave grist for the discursive mind, but more importantly, stirred the soul and called me home.

I have always been intrigued by the 'trickster' stories of First Nation peoples. Sometimes wearing the feathers of Raven, or the eight-legs of Spider or, frequently, the multi-hued robes of Coyote, I grew to understand the trickster archetype as a being who traverses the borderlands, often against overwhelming odds, navigating known and unknown worlds, and the 'in-between' spaces. Sometimes hero, sometimes fool, sometimes both and neither, Coyote maneuvers and exposes the thresholds of power - social, psychological, cosmological - often tricking the gods themselves and revealing something of the nature of the Divine.

Koyote the Blind (so named by his Yaqui-Lacondon benefactor, the elder Nagual, Teczaki Guitame Cachora) is the author of The Golden Flower: The Yoga of Dreaming and Astral Mastery. I have known him for many years as friend, teacher and guide. He is an exemplar of one who wears the Coyote robe in the service of Humanity and those who dream the dreams of the Infinite.

The Golden Flower: The Toltec Mastery of Dreaming and Astral Voyaging, is a book of Awakening. The awareness that we are always dreaming is the first threshold. Our awareness, perceptions and experiences of "the world" are the same in the waking as they are in the Dreaming. Each involve the assembling and identification with a point of view we call "I". Between one state of awareness and the next, in both the waking state and the Dreaming, we sleep. In The Golden Flower, the reader is guided, through experimentation and discovery, to an awakening of the essential unity between the waking and the Dreaming. We awaken to discover that we are the Dreamer and arrive, still dreaming, at successively more refined thresholds of the higher planes of consciousness and the opening to further awakenings.

The engagement with Koyote the Blind's The Golden Flower, is an initiatory experience. Whether a novice or a well-studied Dreamer/Voyager, the narrative and navigation of The Golden Flower is splendidly accessible. The words of the guide carry a vibrancy that ignite the knowing of the mind with the veracity of the heart. Read each word with full attention. The mood and atmospherics of the chamber within which you read awaken with you in and across the dream spaces. This is shamanic voyaging: powerful, elegant and precise.

Dreaming is the Great Key, and Koyoteâs lessons in flying will take you there. I recommend this book highly, and will suggest it to anyone who asks me a question on the subjectâhis answers and mine will be the same.

--E.J. Gold, author of The American Book of the Dead, Practical Work on Self, and The Human Biological Machine as a Transformational Apparatus