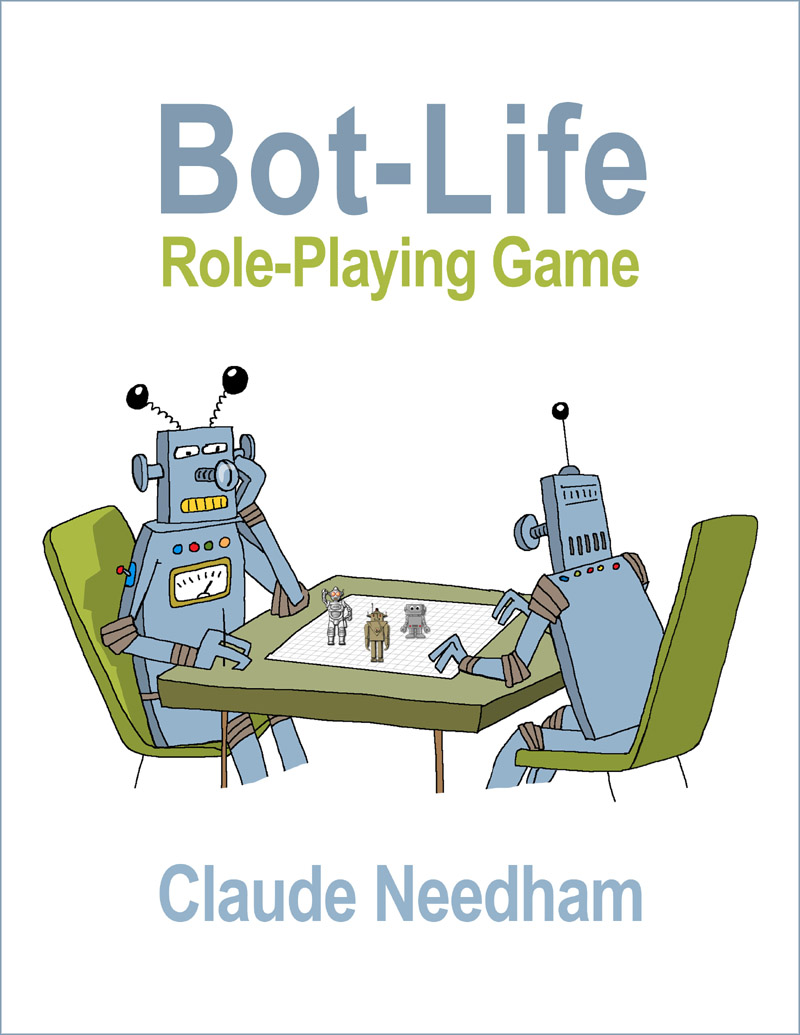 The print version of Bot-Life is not available as yet. But, don't despair the pdf ebook version is available. Available now for instant access.

Well, Bot-Life started about 20 years ago. The vision for the book came to me in a flash at the LA GameCon. Lee and I were speaking with the CEO of GameCon on the topic of spiritual gaming. He was taken by the idea and offered us a full presentation room any time we wanted. We were standing there looking at the 200+ sized room that had just been offered to us when the vision of 200+ people playing what has come to be Bot-Life flooded my imagination.

The broad strokes of the game were clear in that moment. An RPG table-top game played with tables created from the player's own life.

The game quickly became one of several back-burner projects -- brewing quietly in the background.

With the development and release of the three-step narrative process all major components for the game were in place.

A rough draft of the game was released to a friend for presentation at a workshop. Despite the uphill battle to interpret and implement the gaming rules the Bot-Life event was a huge success. Looking back at that early version of Bot-Life it is surprising they were able to put the pieces together.

Many players from that first release have joined an online team helping with the further development of the game. Their help has been vital. We are now on version 32 of Bot-Life. Soon to be released. Just a few more heavy beta-testing rounds before the release.

Along the development path Bot-Life has blossomed into several separate lines for release. Each line serves its intended audience in different ways.

Bot-Life (Role Playing Game) In addition to the basic benefits of all Bot-Life games, this full version of the game optimizes the player's opportunity for life examination.

Bot-Life (Workshop) The workshop version focuses on ease of access and introduction into Bot-Life. It continues to provide all the basic benefits while being wrapped in a format that allows introduction in a single-day workshop setting.

Bot-Life (Group Experience) This form of Bot-Life is actually many games under a single umbrella. This lineage of Bot-Life games optimize connections and the rehabilitative aspects of the narrative method. Bundled under this umbrella can be found a collection of games that address the wide variety of group situations. I can see this functioning as an evening game among friends, a fun adventure in a senior center, even a dynamic foray into theatrical improv.

It is a great tragedy of our time that the new modes of communication relegate our means of social discourse to bumper sticker speech. I have witnessed for myself the transformative power of an afternoon spent exchanging 3 to 5 minute vignettes with others in a group.

These are not gut wrenching, telling of hidden truths, baring one's soul. These are more akin to creative story telling. It just so happens that the three step narrative process puts the speaker on a track that helps them create and deliver a story with absolute authenticity. Thus giving the members a clear view of others without platitudes, bumper-sticker speak, or positions.

Where one or more is gathered in the name of creative narrative there too shall be clarity, creativity, and connection.